This tutorial will walk you through the creation of a custom XBlock. It will allow to display a video in a course, using oEmbed, and record when the student finishes watching it.

To give you a sneak peek, the goal is to generate this: 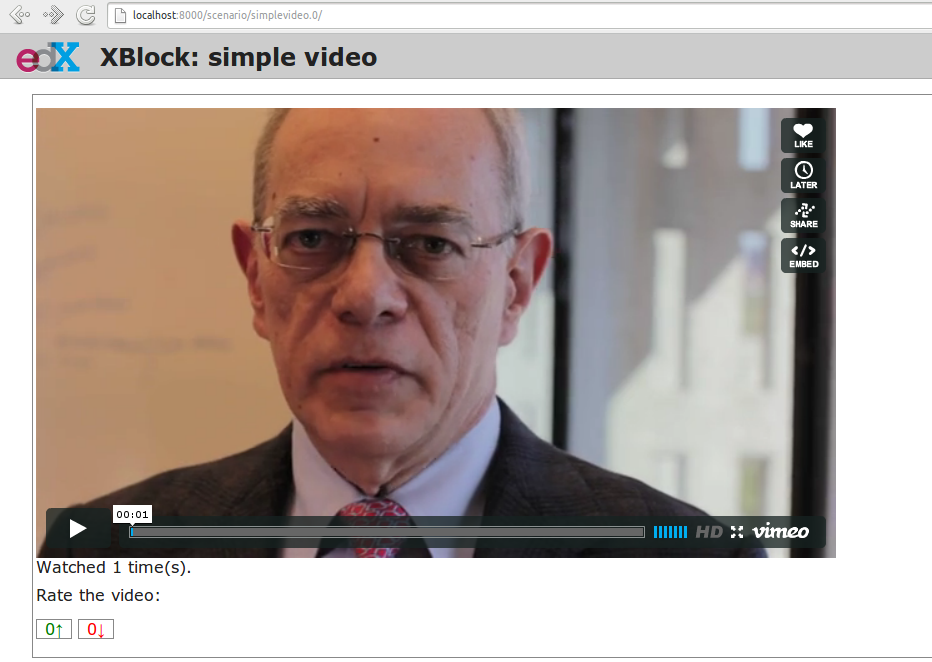 If you get stuck, or have any question, and can't find the answer in this documentation, don't hesitate to ask for help. You can either: 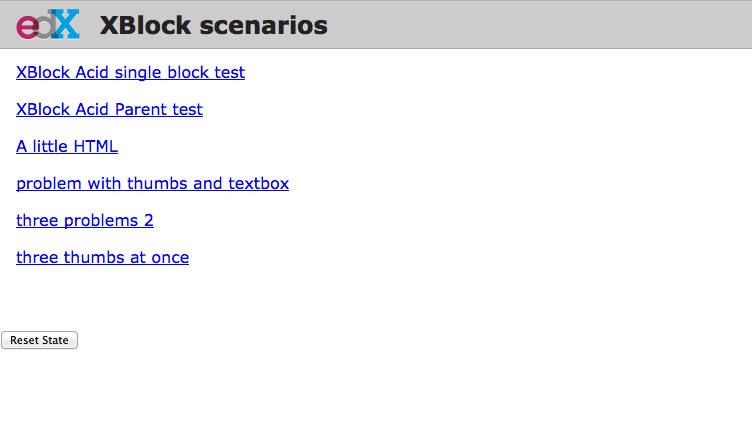 The simplest way to get started on a new XBlock is to use the bin/workbench-make-xblock script from the xblock-sdk repo. It asks for the name of your XBlock and creates a new folder containing a working barebones XBlock with heavily commented code and all the required boilerplate.

For this tutorial however, we will be creating our custom XBlock manually.

First create a folder for you custom XBlock outside of the xblock-sdk repository you just cloned, and initialize a new git repository in it:

We are defining the <simplevideo> XBlock, which we want to allow to accept different attributes:

We will create a subclass of the XBlock class that we will later register to control our <simplevideo> tag. Let's call it SimpleVideoBlock and define it inside simplevideo.py located at the top of the xblock-simplevideo folder.

Our <simplevideo> tag will accept three attributes: href, maxwidth, and maxheight. We will define them as attributes of the SimpleVideoBlock class. The simplevideo.py file should look like this:

We specify the type of the attributes (String / Integer), their default values, and their scope.

All three attributes here use the predefined content scope, which indicates a definition from the content creator, which is not specific to a given user. See the documentation about fields for more details.

We declare a view, which will fetch the HTML code from the oEmbed provider, based on the value of the SimpleVideoBlock.href attribute. The view is defined as a method on the XBlock, SimpleVideoBlock.student_view():

The HTML we obtained from the provider is interpolated into an HTML template (static/html/simplevideo.html). The output is used to build a Fragment, which is then returned for inclusion on the page.

To load static resources, we are using Python's pkg_resources module. The default directory structure makes use of individual css, html, and js folders. This structure is not mandatory though, each XBlock can choose its own, as long as it specifies the correct paths in the call to pkg_resources.

Here we only need a very simple template, which we create in static/html/simplevideo.html:

This template is not strictly necessary here, as we only use it to include the HTML returned by the oEmbed provider in a <div>, but it will be handy to add additional HTML to our XBlock later on. It also allows you to see how static files and templates are loaded from the static/ subfolders, using the pkg_resources module. Later on, we will use the same method to load CSS and JavaScript files.

How do we actually use the <simplevideo> tag we just defined? Let's say that we are producing a new course, and we want to display the video from https://vimeo.com/46100581 to the students. This could be done using the following markup:

This is how courses are built - such markup constitute the basic static building block for course content. The instructor combines different XBlocks like this, to eventually have the whole course described in a XBlock document tree.

Here, we display three elements, aligned vertically using the <vertical_demo> XBlock. First there is our video, using the <simplevideo> tag, then an HTML <div> tag, and then a <thumbs> XBlock, to let the students rate the video by clicking on thumbs (up/down).

Where this markup would be specified is actually independent from XBlock - the instantiation of XBlocks and the call of block methods/views is performed by a runtime. However, the workbench provides a quick way to load a set of "usages" (individual instances of XBlocks) in a scenario. To define a scenario for the workbench, add the following method to the SimpleVideoBlock class:

The attributes, like href, are mapped to attributes of the XBlock class and automatically initialized to the provided value. It allows you to specify which video should be displayed in this particular scenario.

XBlocks are loaded dynamically as plugins, using the entry_points mechanism of setuptools. XBlocks are registered by looking up entry points with the name xblock.v1. The workbench will call the workbench_scenarios() method on each registered XBlock, to populate the list of scenarios displayed on its homepage.

Create the following setup.py file at the root of the xblock-simplevideo folder:

Then create the file requirements.txt to allow to register the package, as well as automatically install other dependencies such as the requests module we use to query the oEmbed provider:

The -e . option tells to always use the latest files from the development directory, instead of packaging the files when you run the command.

You should see the new "simple video" scenario appearing in the list from http://localhost:8000/ (highlighted in yellow on the screenshot): 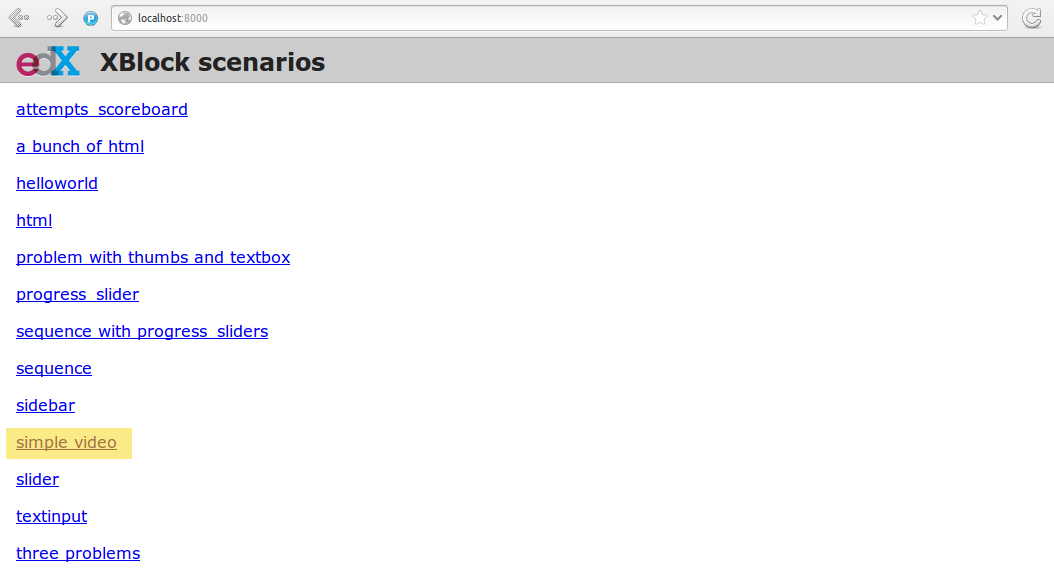 When you click it, you should see the video appearing, along with the thumb block to rate the video: 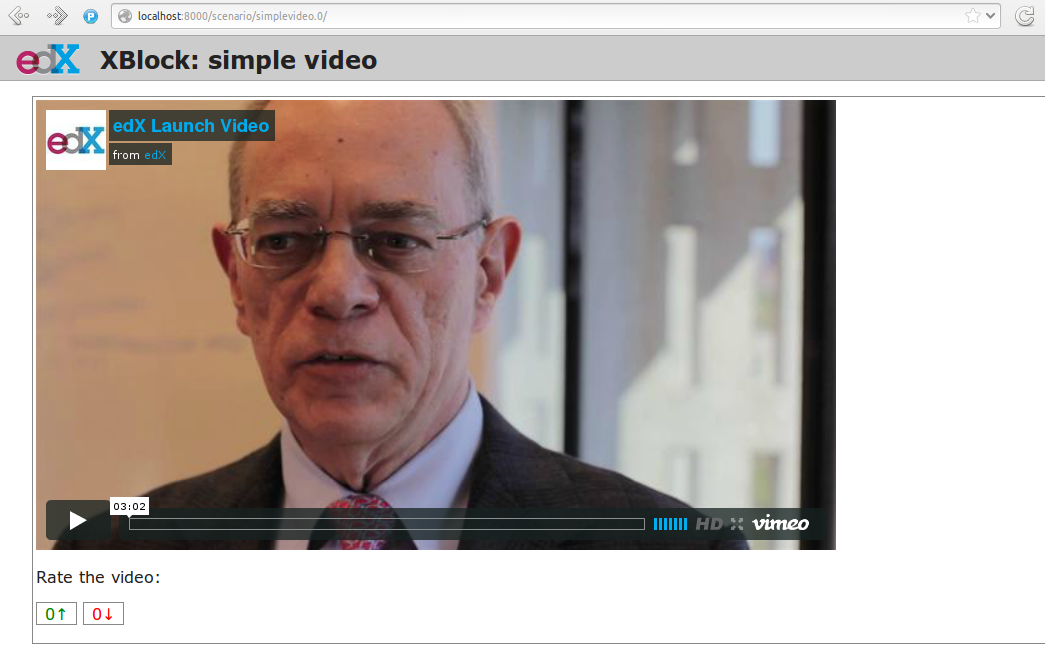 Let's say we want to add a small margin above and below every video. We'll do this with CSS. Create the file static/css/simplevideo.css and put the following code in it:

Then edit the SimpleVideoBlock.student_view() method:

Reload http://localhost:8000/scenario/simplevideo.0/. Tada! You should now see bigger margins on the top & bottom of the video.

Now, something fancier. We want to keep track of whether a student has finished watching the video -and if he did, how many times. We'll use JavaScript to make an Ajax call to the server when the video is finished. For this, we load both Vimeo's JavaScript API library (Froogaloop), as well as our own JavaScript file, static/js/simplevideo.js:

Update the template we created before to display the number of times the student has finished watching the video:

And finally, add the mark_as_watched() method to the XBlock, along with a new watched_count attribute, which will store the number of times the user has completed watching the video:

You should now be seeing something like this after you watch the video a couple of times:

To use the SimpleVideoBlock in the Studio and LMS, there are three things you need to do:

Assuming you are running edX from the devstack, this is how you can do this:

You should now be able to see an "advanced" button under "Add New Component" when you are editing a unit. If you click the button, you will be able to add the "simplevideo" XBlock to your course.

At this point, the block is unusable because there is no way to set the href, maxwidth, and maxheight attributes. We need to implement the studio view to be able to set the attributes through the Studio UI.

To implement the edit UI, we need add the studio_view method to the SimpleVideoBlock class:

The studio_view method looks similar to the student_view method. It constructs a fragment from a static template. The static/html/simplevideo_edit.html template contains the form the is displayed to the user when editing the block in the Studio:

We used some common Studio CSS classes to style the form so that it looks consistent with the rest of the Studio.

At this point you should be able to see the form when clicking the "edit" button on the simplevideo block.

The "Save" button doesn't do anything yet. In order to get it to actually save the attributes, we need to add another JSON handler function to the SimpleVideoBlock class and add some JavaScript to wire it up.

Let's call the JSON handler studio_submit. It simply sets the attributes to the values it receives in the POST request. It would be good to have some validation logic in place, but we'll keep it simple for the tutorial:

We attach a click listener that POSTs the attribute values to our JSON handler when clicking the "Save" button. Just before POSTing the data, we call runtime.notify('save', {state: 'start'}), and then call the same function again with {state: 'end'} when the requests completes. The first invocation closes the modal window with the form and displays a "Saving..." message in the Studio. The second invocation hides the message and reloads the block view.

We also attach a click listener to the cancel button, which calls runtime.notify('cancel', {}) which causes the modal window with the form to close.

We need to add the JavaScript to the fragment that is returned from the studio_view method:

A repository containing the code from this tutorial can be found at https://github.com/open-craft/xblock-simplevideo.